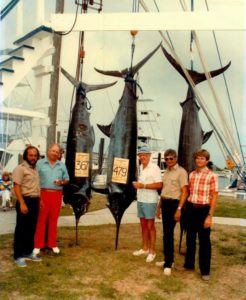 In 2015, Cheryl McLeskey began the F. Wayne McLeskey Jr. Memorial Marlin Open as a way of honoring her late husband, Wayne, who not only spent much of his time fishing the waters off Virginia Beach but who also called Rudee Inlet and the Virginia Beach Fishing Center home.

On January 1, 2017, exactly 5 years to the day after Wayne’s passing from lymphoma of the small intestine, Cheryl was diagnosed with breast cancer. Throughout her battle, Cheryl was fortunate enough to have been loved by, prayed for, and supported by so many friends and family from near and far. However, some of her greatest supporters were found along the way and here at home in Virginia Beach.

Because of the incredible outpouring of love and support from so many she encountered along the way, Cheryl knew when she was strong enough- she would want to give back to those who gave so much to her. While Cheryl became a mentor to those suffering around her here in Virginia Beach, she still wanted to do more and knew the F. Wayne McLeskey, Jr. Memorial Marlin Open was the perfect opportunity to raise awareness and funds for the great local charities in our area.